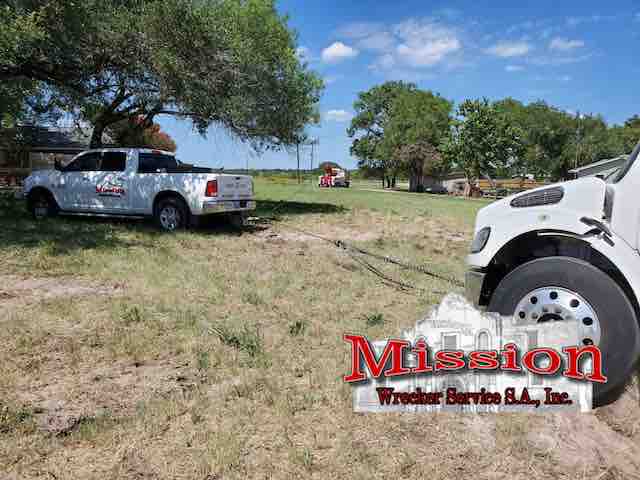 When a commercial towing company is called out on a rescue mission, a heavy wrecker is usually the hero of the story, but not this time. A tricky backyard obstacle course involving a septic tank called for the help of a trusty pick-up truck. Here’s what happened…A Floresville, family in Wilson County had hired an industrial paper shredder to help clear out trash from their barn. New in town, this also happened to be the paper shredding companies first day on the job! Arriving at the family home, the driver of the paper shredder headed across the field to the barn, no problem for this family who drive across the field all the time. Unfortunately for our paper shredder driver, his box truck was loaded down by the weight of industrial paper shredding machinery, and riding over a sand bank, the truck bunkered down and got stuck.(Oh that sinking feeling when it’s your first day on the job, and you’re the guy who has to call out for a tow!)Mission Commercial Towing acted fast, dispatching a 50-ton wrecker to the rescue, driving from their base off the I-10 East of San Antonio, south into Wilson County, Texas. The heavy wrecker parked off the driveway, but the angle for the tow was tricky – having to avoid a septic tank in the yard, and a fence blocking the wrecker from getting any closer. The first attempt giving the paper shredder a tug out the sand bedded the truck down even deeper, more help was needed for this rescue mission! A second technician from Mission Wrecker joined the efforts, arriving in his trusty pick-up. Parking up in front of the wrecker, nose-up to the fence, the team ran a snatch block to the back of the pick-up to create a 90-degree angle in the tow between the heavy wrecker and the unfortunate paper shredder. This gave the operation the extra power it needed to tug the truck free from the sand in one smooth tow.Fast thinking from the team at Mission Wrecker who always get the job done! And we hope our new friends at the paper shredding company finished their first day on a high. 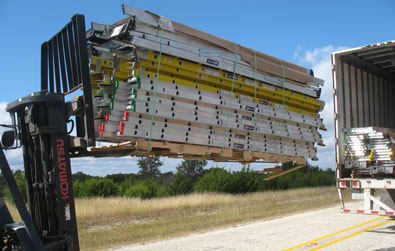